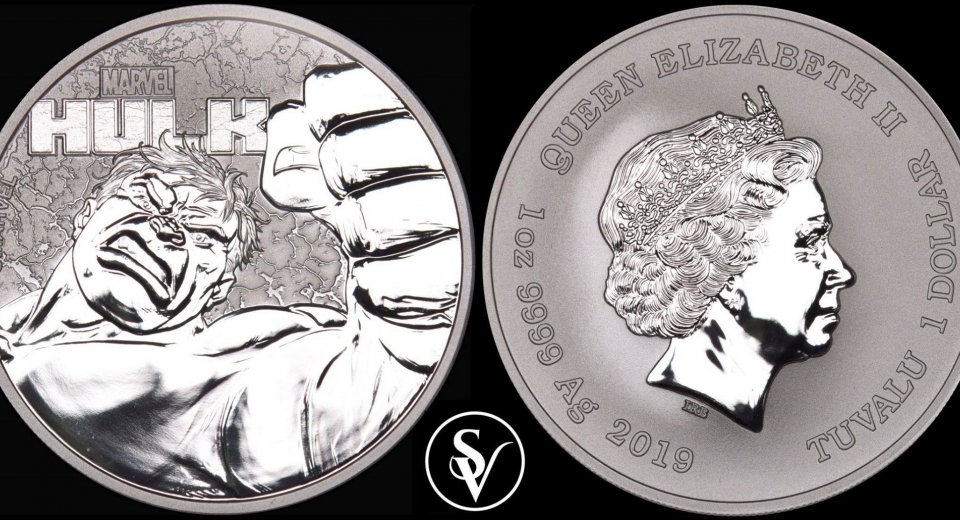 Bears a face value of 1 Dollar backed by the government of Tuvalu.

Obverse side includes the image of Queen Elizabeth II.

Reverse features an early depiction of Hulk from Marvel Comics.

Yet another character from the Marvel Universe created by Stan Lee and artist Jack Kirby, Hulk made his debut in May 1962 in the first release of THE INCREDIBLE HULK.

The Hulk is portrayed in the comics and in feature films as contrasting personalities. One is the green-skinned hulking mass with superhuman physical strength, while the other is a socially-awkward, withdrawn physicist. On the obverse face of 2019 1 oz Tuvalu Hulk Marvel Series Silver Coins is an image of Queen Elizabeth II. This is the Royal Mint of Englands fourth-generation portrait of Her Majesty. It featured on British coins from 1998 to 2015, on Australian coins from 1998 to 2018, and continues in use on coinage for smaller commonwealth nations like Niue and Tuvalu to this day. The reverse of the 2019 Tuvalu Hulk Marvel Series Silver Coins includes a depiction of the Hulk. He is, in reality, the mild-mannered physicist Dr. Bruce Banner. When engraved, Banner loses control of himself and morphs into his alter ego as the massive and powerful hulk.