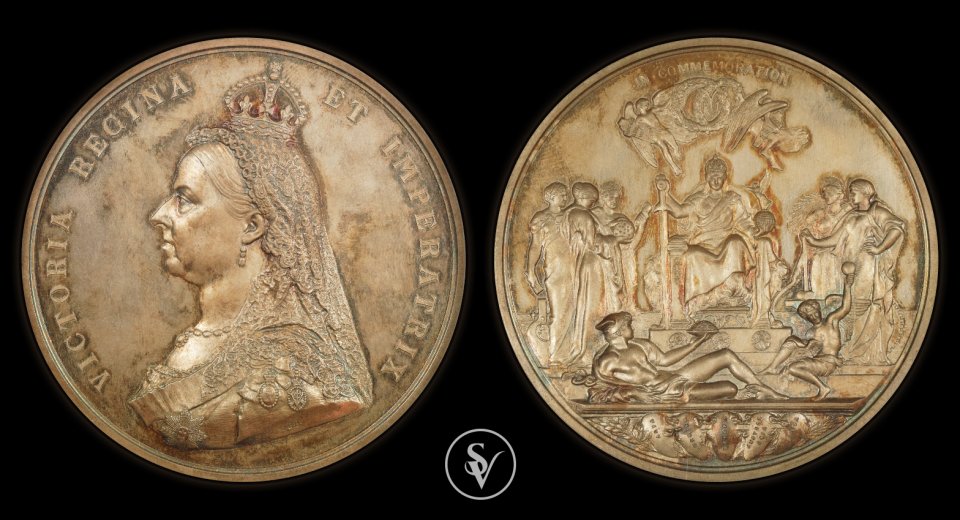 Product ID:
PRODUCT INFORMATION
NGC MS 66
Silver
Celebratory medal for the Golden Jubilee of Queen Victoria, which was celebrated on 20 June 1887. This is the official Jubilee medal and is one of two commemorative medals for the event, designed by Joseph Edgar Boehm and Frederic Leighton. With little experience in the designing for small surfaces, Boehm's 'Jubilee Head' coin design had been heavily criticised and unpopular with the public. The larger format of the medal gave him greater space and was an improvement on the effigy. Leighton’s late delivery of his design for the reverse led to delays, and the medal was not issued until 18 July 1887, nearly a month after Jubilee day.

Crowned and veiled bust left; VICTORIA REGINA ET IMPERATRIX. Design by J E Boehm. / Enthroned figure of the British Empire with Mercury and the Genius of Electricity and Steam at her feet, the female figures of Science, Letters, Art, Industry and Agriculture surrounding, two cherubs above; IN. COMMEMORATION. Design by F Leighton.
In secure plastic holder, graded NGC MS 66